This page was created to give Production Assistants some writing samples for alt text. For more information about how and when to create alt text, please see the Images page.

The following examples are meant to be used as general guidelines, and as inspiration for writing alt text. Remember, the style and tone of the book you are working should be the greatest influence for the alt text you create.

This image is from All we Leave Behind, by Carol Off. It is a non-fiction, journalistic style book written for a general audience. The images in the text are from her time in the Middle-East.

"[Caption from text] A snowball fight during the trip to Mazar-e-Sharif. Asad and Sher Shah flank our driver."
Alt text: Two vehicles are parked on a road. A rocky hill is to the left of the vehicles, snow-covered land to the right. Carol is standing near the first vehicle and ducks down slightly, with her back to the camera. By the other vehicle, Asad, the driver, and Sher Shah stand facing Carol. They are all smiling; one is packing a snowball in his hands.

This next image is from Bone Mother by David Demchuk. It is a horror fiction book made up of connected short stories; each chapter is named after a person and includes a vintage photograph. All of the images are cracked, torn, or decaying, and since this repeats in every picture, this sort of information should be included only in the first image description. Exceptions were made when a photo was notably decayed. 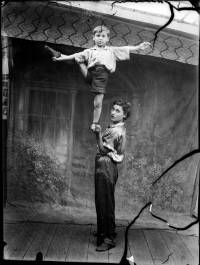 Alt text: Portrait of a young woman and boy, standing in front of a cloth backdrop which has been painted with windows and flowers. The woman wears satiny pants and a satiny top, and her dark hair is twisted up. She stands with her side to the camera, but looks forward. She is holding the boy up in the air, holding his foot in her hand. His arms are extended out at his sides, and he is holding his right foot out, supported by his right hand. He wears shorts and a loose button up shirt.

This next image is from the children's book Missing Nimâmâ by Melanie Florence. Note that the description refers to "the fry-bread dough", instead of being vague or general - this is because that information is given in the text. Therefore, it is best to include it. Another thing to note is the description of the Cree word "nôhkom" (it is written very faintly) - a glossary was provided at the start of the book, and since the book is for children, it is helpful to define the words that appear on the page. 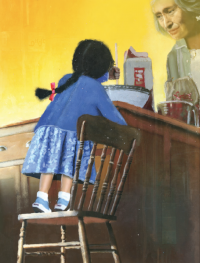 Alt text: Kateri is standing on a wooden chair in her grandmother's kitchen, and stirs the fry-bread dough with a wooden spoon. Her grandmother is holding a bag of flour, and watching Kateri stir. There is a carton of milk and a measuring cup on the counter. The Cree word for nôhkom, which means grandmother, appears near Kateri's head.

Graphs and charts can be particularly tricky to describe, as they can convey quite a bit of information. Do your best to describe the essential pieces of information to the reader, and ask someone else for help if you need it.

The following three graphs and charts are from the book Age of Discovery by Ian Goldin and Chris Kutarna. Context: The book is a non-fiction work discussing the relevance of the renaissance to the modern age. It was written by scholars, but for a general audience. Therefore, the descriptions are detailed, but do not presume any prior knowledge other than what is offered in the text.

"Figure 1-2: Google searches for “globalization” have been declining for a decade."
Alt text: A line graph depicting the Relative Popularity of searches for the term globalization. The horizontal x-axis shows the years 2004 to 2015, and Relative Popularity appears on the vertical y-axis, ranging from 0-100. The line has many peaks and valleys, but trends steadily downwards, with high points trending down from 100 in 2004 to around 30 in 2015, and low points trending down from 40 in 2004 and 20 in 2015.

This next graphs are from the book The Great Leveler: Violence and the History of Inequality from the Stone Age to the Twenty-First Century by Walter Scheidel. It is a political science book that is quite academic in tone, which is to be expected as the book was published by a University press (Princeton). 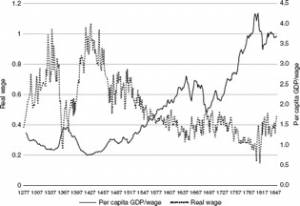 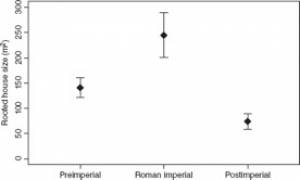 This first map is from American War by Omar El Akkad. It is a science-fiction/dystopian future novel about the second civil war in America. 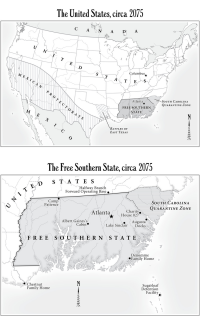 Alt text: The top map depicts The United States, circa 2075. The map shows the South Carolina Quarantine Zone (in modern day Florida) directly to the east of the larger Free Southern State (where Atlanta is). West of this is the Battles of East Texas area. The Mexican Protectorate lines the south western area of the map (including modern day California). The border between Canada and the U.S. remains pretty much the same as modern day.
The bottom map depicts a closer view of the Free Southern State, circa 2075, taking up the south east corner of modern day U.S. The map depicts the Chestnut family Home directly to the east coast of the state. Within the state, the capital is Atlanta in the central northeast, Camp Patience lines the border in the north west of the state. The Halfway Branch Forward Operating Base lines the northeast border. Slightly southwest of Atlanta is the Albert Gaines' Cabin; directly southwest is Lake Sinclair. East of this is August Docks, and north of this is Charity House 027. In the northeast, the South Carolina Quarantine Zone lies, and on an island to the south of the state is the Sugarloaf Detention Facility.

This next map is from Minds of Winter by Ed O'Loughlin, a historical fiction novel about the polar exploration of Canada. A very detailed description is given because the exploration of this area is key to the story, so the reader may want to refer to this map as they read through the book. 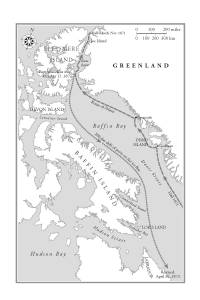