We mark up poetry differently than normal paragraph text. For Poetry, we apply the following DAISY Styles in Word:

By poetry, we mean any text where definition of poetic structure is required. The Poem (DAISY) style is an appropriate form of markup for song texts or lyrics.

The Poem (DAISY) style is used to wrap the entire poem, or fragment of a poem, in the <poem> tag and the lines of the poem in the <line> tags in XML.

The Poem (DAISY) style may also be used to mark up texts displaying elements of versification, metre and rhyme where the use of the Normal paragraph style is considered insufficiently accurate.

You must always apply the Poem (DAISY) style first, before you apply any of the Title, Author, or Byline styles.

The Poem - Title (DAISY) style is used to wrap the title of the poem in the <title> tag in XML.

Sometimes you will have a book of poetry that uses titles as a point of navigation (similar to the chapters of a book.) In these cases you can markup the titles as a Heading Style and then copy the Title directly below the Heading Style and apply Poem - Title (DAISY). This will mean there will be two titles for each poem. Only do this if the book is set up to have the titles work similar to chapter navigation.

The Poem - Byline (DAISY) styles can be used to wrap information about the creator of, or contributor to, a work, usually consisting of more than just an author's name. A byline may not contain a name at all.

The Author (DAISY) style can be used to wrap the author of the poem in the <author> tag in the XML. Only select the author's name and not other words, such as "by".

Sometimes certain styles can be retained within the poem, such as italics. If you are working with a poem with such formatting please contact us to advise how edit.
Some poems will end a line mid-sentence, or even mid-word. In this case keep the formatting as is. The reader will keep pace with the poem.

Poems in a foreign language

If the poem is in a foreign language, we can select the text and go to Tools > Language > Mark Selected Text As and select the relevant language of the text.

If only select individual words are in other languages, do not apply any language formatting. Simply make a note of this and include this note when you are done and transfer the ticket to the Production Coordinator via RT.

Sometimes you will come across a poem that has more complex formatting that can not be translated to DAISY.

We can not retain this formatting for DAISY conversion.

If you have any complex formatting that is not covered below, please ask in the Q&A.

The more common forms of complex formatting are:

In poetry the use of blank space on a page, between lines, words, or even letters, can be used to convey meaning. We can not retain blank spaces.

A Concrete poem is a poem where the words create a shape on the page that conveys a visual meaning. We can not retain the original shape of a concrete poem.

If you have a concrete poem, simply keep the line break/word breaks as they originally appear with left justification and insert an In-Text Producer's Note explaining the original shape of the poem. See below for more on when and how to use these notes for poetry. 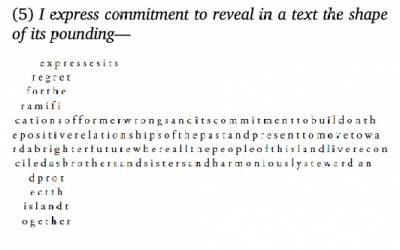 In the section titled (5) the words after the first line originally appeared with no spaces and in the shape of a hammer. The poem has been reformatted to have spaces between the words, and without word breaks at the end of lines.

Sometimes you will come across images of text in poems. This is a big no-no in publishing and not accessible. See the section on Images of Text for more.

We transcribe all images of text and mark up with the appropriate NNELS styles. If it was a case of complex formatting, then use an In-Text Producer's Note.

Sometimes you will find the poet has used an image of a black bar to signify the censorship of a word of phase. In this can you can keep the image and add the Alt-Text "Thick black bar blocking out word/phrase."

In these cases include a Producer's Note at the beginning of the book.

You can update the example above to reflect the formatting of the collection you are working on.

For more info please go to the Producer's Note page.

If there are individual poems within a collection that have complex formatting you may have to also include In-Text Producer's Notes to explain the original formatting and how it has changed with conversion.

Always us the Prodnote - Optional (DAISY) for all poetry in-text producer's notes.

Below is an example from the book Whereas, by Layli Long Soldier. The title of the poem is 'He Sapa' that is broken down into sub-headings with each sub-section having special formatting in the original poem. The in-line Producer's Note is placed after the navigation title styled with Heading 1, and before the title styled with Poem - Title.

For more information on what elements can go within a poem's DAISY XML Structure please check out the DAISY 3 Structure Guidelines for Poetry.

Example of An In-Line Producer's Note 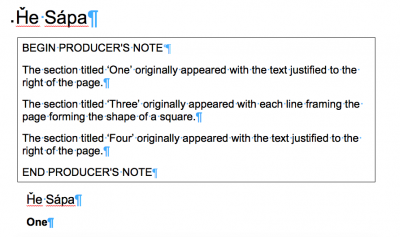 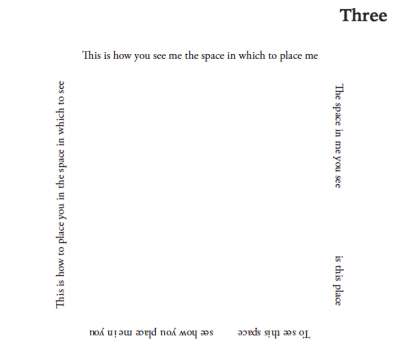 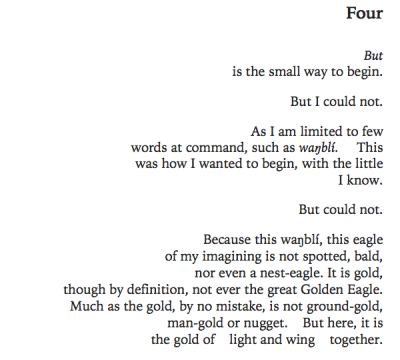 In Word, if we tag the text below with the Poem (DAISY) style…

… then this is the output we will get in XML:

In Word, if we tag the text below with the Poem (DAISY), the Poem - Title (DAISY), and the Author (DAISY) styles…

…then this is the output we will get in XML:

Q: Another poetry question: In the book Treaty #, on page 1, 33, and 63, there are a bunch of backwards words. They're English but they're spelled backwards. They also seem to be slightly out of order. I'm just wondering if you have any suggestions about how to handle this? Do you think I should just leave it as is? The backwards English words are so hard to read (which I think is the author's point) but people with print disabilities may not be able to access them at all this way. I'm wondering about inserting a second version with the words spelled normally but still out of order, with a producer's note explaining that in the original version, they are spelled backwards? Just for accessibility reasons.

A: In this case, leave it as is since it is the intent of the author to have it difficult or impossible to read. Insert a inline producer's not before the title of the poem explaining that the poem includes words that are backwards and out of order to intentionally create confusion for the reader.

Q: In the book of poetry I'm working on (St. Boniface Elegies), there are quite a few words marked with italics. On the page on poetry in the wiki, it says, "Sometimes certain styles can be retained within the poem, such as italics. If you are working with a poem with such formatting please contact us to advise how edit." So, could you let me know how I should handle the italics in this book?

A: You can retain the italics in the lines of poetry, but remove the italics from the titles, blockquotes, Acknowledgements, and About the Author. The italics in the poems themselves are there for emphasis, while all the other times it is just a visual stylistic choice that does not add meaning to the text and therefore not needed for conversion.

Q: Also relating to the book of poems (St. Boniface Elegies), I've come across a poem that is divided into sections and each section has a title. So essentially they are sub-titles and normally I would give them the next level of headings. But since this is poetry, I'm not sure how to handle them. Should I tag the sub-titles with the Poem - Title style? With the next level heading style? Or not tag them at all? The poem I'm referring to is called "downtown campus" in Part 1 of the book.

A: Keep them as Poem (DAISY), but retain the italics. You can also put an inline producers note to explain what you have done. The wiki has some examples of this in the poetry section. Poems are often a bit tricky, since they are both creative and we are limited by what we can do within the DAISY consortium standards for access. Hope that helps!