A Producer's Note contains information added to the book by the producing organization. It's commonly used to describe differences between the print book and the digital talking book version. Traditionally, this has been called a transcriber's note, reader's note, or editor's note.

It may contain information about a key way that the etext differs from the original text, or that all of the images in the text are in black-and-white, or clarify some key aspect of the document.

They are also used far a book that has Indigenous Languages, and for books of Poetry. Other instances are highlighted through out the wiki.

Sometimes we will need to insert a producer's note within the body of the text. This is what is called an In-Text Producer's Note.

A common instance is when there is Alt-text that is longer than the recommended 120 words. When this happens, the longer Alt-text should be put into a Producer's Note. (Be sure to also include a short description in the alt-text). For more information, see Adding Extended Image Descriptions for more information. Often, this will be for something like a picture of a letter, a map, or a graph.

For Long and Complex Descriptions use the Prodnote - Optional (DAISY) so the reader has the option to skip it.

Other cases where this style is used are highlighted throughout the wiki.

Optional producer's notes may be turned on or off by the end user; that is, the playback device or browser includes settings that either automatically play all producer's notes as they are encountered or play only those marked as "required." The PA must decide for each Producer's Note whether it contains critical information that is required, or information that can be skipped, and therefore optional. If there's uncertainty whether to use the Prodnote - Optional (DAISY) or Prodnote - Required (DAISY) use "required", or post a question in the Q&A.

This is so that readers will know that this is not part of the normal narrative.

This is an example of an in-text producer's note used to describe a diagram of a family tree (the diagram is depicted smaller than it would be in the actual text). 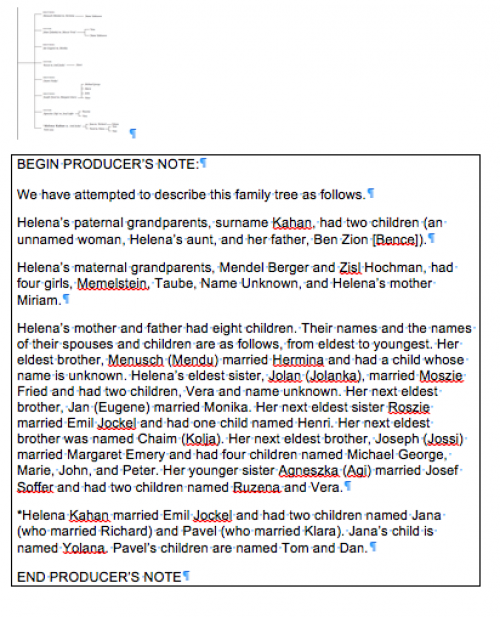 Q: In a book where the original front-matter includes a description of the typefaces used (i.e., "The text in this book uses OpenDyslexic and Minion Pro typefaces."), should this be removed? Or addressed in a "Producer's Note?"

A: Yes, we can address this in a Producer's Note [Heading 1]. We could state something to the effect that "the text is this Digital Talking Book does not use OpenDyslexic and Minion Pro typefaces. These typefaces are used in the original book."