There are two ways we need to think about left and right. The first is from our point-of-view, in the context of the panel, and the second is from the point-of-view of the character.

In the context of the panel, it is often helpful for understanding the composition of the scene to say if someone/something is to the left or right of the panel. This will help the reader orientate themselves within the scene.

Pull out to a wide view of the street. The alleyway is to the far left of the frame. Rick and the horse are seen from behind, near the edge of the panel as they walk past the Café.

In the above description, we did not state that they were near the right edge of the panel; this is because the placement of the cafe in relation to the alley had already been established, so it did not need to be said. 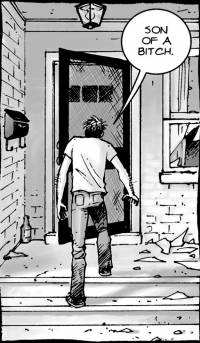 Current Version: Rick walks up the porch steps. The outer screen door is half-open.To his left, a black mailbox with hooks for a newspaper is affixed to a brick wall. On the left is a broken window. Broken glass is scattered on the landing.

We learned to be far more succinct in our descriptions, and this results in the information being conveyed more clearly.

The above example also showcases the left/right issue with respect to the point-of-view of the character. We do not usually need to specify which hand is doing an action, unless it is important in some way. Or, if you do describe what “the left hand” is doing, when you describe the right, just call it “the other hand”. For instance, if you say “His right arm is stretched out in front of him…” you can say”…and his other arm hangs at his side.”

An image can be broken into three main layers as viewed by an observer. These are the foreground, middle ground (aka midground), and background. The foreground is the closest layer of the image in the panel, and has the most details. It is the main focus of the panel. The middle ground, or midground, is considered the middle of the panel, where details are still in focus but slightly more vague. The background is the farthest layer of the image in the panel with the least amount of details and blurred colours.

These will not all be described for every single panel. You will need to use your judgement to decide what is important to describe, and when. We are trying to achieve a level of description that is not so detailed as to be distracting, but that definitely helps our reader be able to accurately orient the positioning of the characters and the layout of the scene in their “mind’s eye”. If the setting has been described before, you may not need to re-state where things are with respect to their positioning and grounding, but again, use your judgement and ask if it helps with the narration to describe.

The following example is a panel where we clearly state what is in the foreground, midground, and background.

Wide panel.
Close view of Rick from the side. Rick is visible in profile.
In the background, framed by Rick’s hat and face, is a two story farm house with a side garage and front porch, deep back in a grassy field. It is surrounded by trees. In the midground the top of a wooden fence is just visible at the side of the highway.
Rick is in the foreground; he squints his eyes as he looks straight ahead. His jaw is set and his mouth is in a small frown.

But in the next panel that follows it, we do not need to be so precise, because the scene has been established. 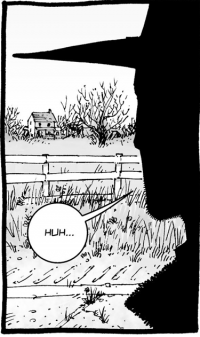 Vertical panel.
Pull out slightly.
The shoulder of the highway is now visible in the foreground of the panel. The wooden fence is a few feet further back surrounded by tall grass. The house is still visible in the distance.
Rick’s face is in silhouette as he turns to look toward the house.
“Huh…” he wonders.