This section breaks down the basic terminology used for comics. This will grow and be amended as we learn more.

If a comic uses a layout that is confusing, non-linear, or widely open to interpretation, it might not be a suitable comic for us to describe. The Assisted Reader we produce is constrained by the format of the document, and the information will be presented in a linear fashion. If this linear format does not serve to recreate the comic book experience for the reader, it might not be worth describing. Not every comic is suitable for description - ask your editor if you are unsure!

“The entryway to the room makes up the frame of the panel.” 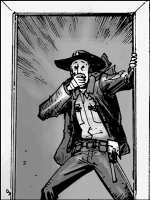 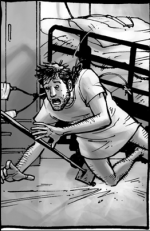 This type of description not often used, and it will be clear by looking at the panels themselves when graphic weight is used vs. when it is not used. Remember not to over describe your panels. Only mention colour or style of art if it stands out and is important to the story, do not describe it if the entire comic is drawn in the same style throughout.

Speech bubbles and their text are rarely described (special instances are provided below); rather, we use a “coded” language to indicate when a special bubble is being used. Listed below are the most common types of speech bubbles, but many more exist. For a more extensive list and visual examples, please visit Blambot.

As mentioned, speech bubbles are rarely described, but there are occasions when the appearance of the bubble is important to the story, or to the visuals of the comic. Here are a few examples; please note that this list is definitely non-exhaustive. Describe the bubble when:

His answer appears in four speech bubbles which form a chain and cross over the gutter into the next panel. 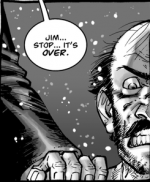 The tail of a speech bubble leads up and out of frame as the man holding his shoulder says, “Jim…Stop…It’s over.”

* Captions: These do not emanate from any character. The text can appear in a rectangular or square box, or the comic may use its own style, like a banner. Sometimes a caption may appear as floating text. Please see floating caption for more information. They can signify that a narrator is speaking, or the thoughts of a character. Make sure to clarify this in your description, if it is necessary to the narration.

Only describe details of the word if it is part of the visual narration. For example, when the word for the sound overlaps the top of the frame and over the gutter above. Sometimes a sound will appear within a speech bubble. In this case describe it as you would dialogue. 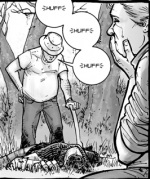 ==== 2.3.3 Additional Resources ==== For more information on Speech Bubbles and Text please check out these resources: