Lists are often overlooked as an accessibility feature, but the ability to move quickly and effectively through long lists of points is a key reading need.

Unfortunately, you will see in many ebooks it's still the case that lists are rendered as anything but proper lists (i.e. you'll often see a new paragraph for each item, or manual line breaks to separate entries, lists in tables etc.)

When a reader has to traverse every item in the list one item at a time to get to the end, or listen to the entire list from beginning to end, the problems of bad markup become more pronounced. Properly tagging lists is a small measure that can greatly decrease reader frustration.

Do not make lists with just manually typed characters like dashes, numbers, asterisks, or graphics as a screenreader may not be able to read the list in the proper order. When bullet or numbered list formatting is used, screenreaders will properly announce the text as being part of a list, and provide a means for the user to quickly navigate between items as well as move in and out of lists.

Avoid using lists for either just indent or layout purposes. List elements must not be used for purely presentational purposes.

Use the appropriate button in Word’s formatting toolbar, i.e. bullet or numbered list.

When you make a list using direct formatting, it will still cause the "List Paragraph" style to appear in the Styles Pane. If modifications are needed (i.e., spacing), do this by Modifying the Style (not by using further Direct Formatting). 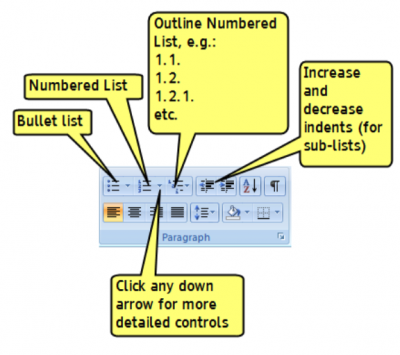 Using the correct list type is also important as it may be the only cue to the reader whether the order of items is significant. An alphabetical list is not necessarily an ordered list; for example, arranging items is not the same as assigning them a specific order. If you can re-arrange the items without changing the meaning of the list, you've defined an unordered list (i.e. indexes and bibliographies do not lose meaning when re-ordered).

Optional: for display purposes, you can create an invisible bullet using "define new bullet" and selecting the blank bullet character. This is a less desirable format, as it can cause issues with lower vision or readers with cognitive disabilities.

Sometimes you will have text that has ordered lists that are broken up by other bodies of text. In these instances:

Sometimes the numbers will not continue, but this is an easy fix. Each time you apply a new ordered list in word a small lightning bolt box appears beside the newest number.

This is an autocorrect menu that will only appear briefly after you apply the second item in the ordered list. Simply click this box to open a drop down menu that will give you the option to Continue Numbering. Click this option and the number will automatically change to continue from the previous number despite the break between each.

For more information on how to continue ordered lists with breaks please see this tutorial.

Q: Should this list be formatted using H2 and H3 for the countries and institutions, and Lists for the collections? Or should I used nested lists for all elements? 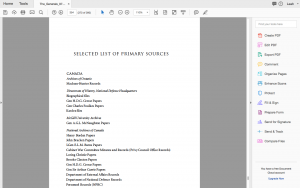