Regular expressions (aka regex) is useful for replacing patterns of text, such as headers/footers with page breaks or simply removing them, or replacing line breaks as is common when text is converted from a PDF (to remove middle of word or middle of sentence breaks).

With regex, you can define patterns of text in a number of different ways, but the most commonly used ones for our purposes are Ranges and Groups. For more information about others, you can take a look at this helpful webpage:

Using wildcards in Microsoft Word (this is similar to regular expressions, but Word has a lot of its own syntax) 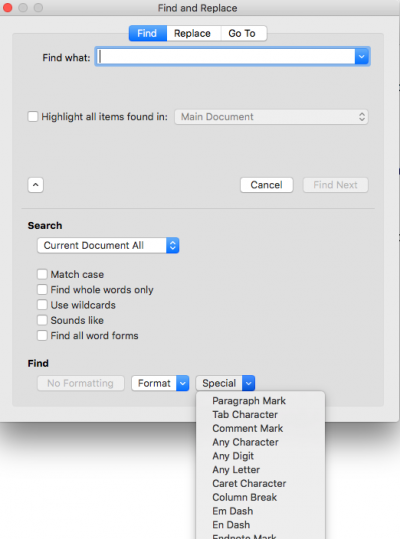 Make sure that the Regular expressions box is checked on the Alternative Find & Replace dialog for all of the search and replace actions below.

The following fixes assume you are using Word, unless otherwise stated.

Contribute your problems and regex solutions below. Attach your screenshots of both the problem and solution.

PROBLEM: Each line ends with a paragraph break.

In Word, this will only work with wildcards turned on.

In this way, you are putting back exactly what it found minus the paragraph break.

SOLUTION: Replace with the same text minus the hyphen.

Using a-z restricts what it finds to lowercase.

You will likely have to do it again for lines that end with a comma, and possibly en and em dash. Look through your document for patterns of anything else it might have missed.

SOLUTION: Replace "i/I"s that come immediately before of after a number with "1"s. This will be done in two steps

PROBLEM: OCR did not recognize spaces around quotation marks.

This problem has an added complexity; the pattern has two different solutions:

PROBLEM: There are newlines/line breaks (↵) instead of paragraph marks (¶).