Text is an important component is the visual storytelling of a comic book or graphic novel. It can appear in a Speech Bubble, Caption, or as a Sound Effect. The style these appear in can give visual cues to the tone, volume, and emotion of the speaker or sound. In other cases it could also be an extension of the character themselves. An example of this would be the Sandman graphic novels where each main character has their own text designed as an extension of themselves. This following section breaks down how we have chosen to describe text as it appears in comics based on our work with The Walking Dead.

Like other sections in this wiki, this is not an exhaustive list. You may come across an instance where the text needs to be described in a more detailed fashion than we have laid out. In these cases first always ask if it is part of the narration. We encourage you to add to this documentation as you discover new examples to be shared.

Speech bubbles and their text are rarely described (special instances are provided below); rather, we use a “coded” language to indicate when a special bubble is being used. Listed below are the most common types of speech bubbles, but many more exist. For a more extensive list and visual examples, please visit Blambot.

As mentioned, speech bubbles are rarely described, but there are occasions when the appearance of the bubble is important to the story, or to the visuals of the comic. Here are a few examples; please note that this list is definitely non-exhaustive. Describe the bubble when: 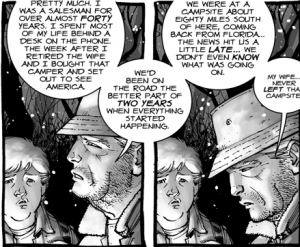 His answer appears in four speech bubbles which form a chain and cross over the gutter into the next panel. 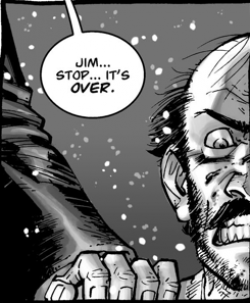 The tail of a speech bubble leads up and out of frame as the man holding his shoulder says, “Jim…Stop…It’s over.” 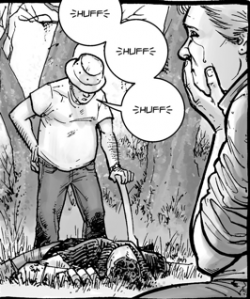 “Sniff, sniff.” He smells something in the air.

For more information on Speech Bubbles and Text please check out these resources: